What a wonderful Thanksgiving! Spending time with family and eating lots of yummy food is always a great combination! We have had the same Thanksgiving tradition for the past several years...Kelly's family comes to our house on Thanksgiving day and then we head up to Oklahoma either that evening or early the next morning. This year over half of Kelly's family was on their way back from a ski trip in Keystone, so it was very low key this year...there were only 5 adults and Hudson. Hudson absolutely loved it though because he didn't have to share any attention. :)
Since Hudson usually is hungry around 11:00, Thanksgiving dinner wasn't ready yet. So, he had one of his favorites...a piece of pizza. Interesting for Thanksgiving! 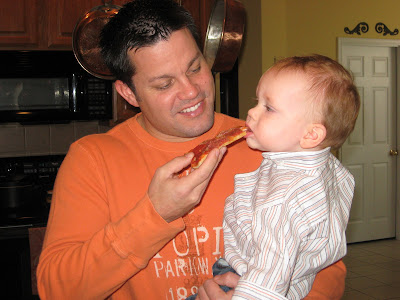 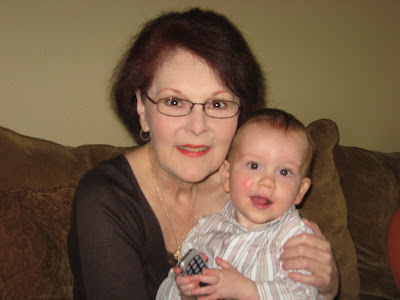 Hudson and Noni (Notice he is playing with a phone? Always!)

I have been trying to teach Hudson sign lanugage since he was about 6 months old. It was my foreign language in college and I was determined to use it with him. He hasn't used any of the signs I have taught him and I was starting to not use it as much because I didn't think it was sinking in. Well, this past week he finally started signing "more". He doesn't do it quite right, but it is his version and is precious. 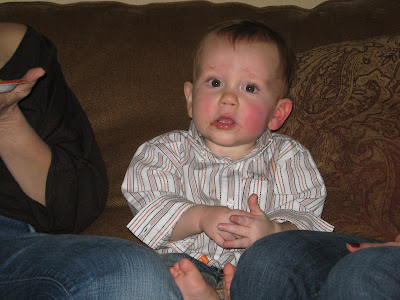 Well, here he is signing "more" for another bite of pumpkin pie. See the evidence all over his face? :)
We decided to head up to Oklahoma early Friday morning. We left right as Hudson was getting sleepy for his morning nap and the timing was perfect. He slept for half of the drive and then his snack trap full of goldfish got us the rest of the way there. We had such a wonderful visit and Hudson did something very exciting while we were there...he TOOK HIS FIRST STEPS! Yea Hudson!! He isn't offically walking yet, but he is brave enough to take a few steps without holding on to anything or anyone. It won't be long now! 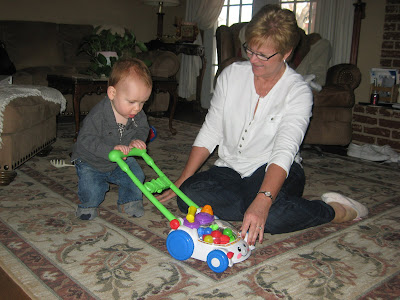 Playing with his toys at Paw-Paw and Nana's house. The lawnmower was a hit!
My picky eater who will hardly eat anything for me ate like a horse at Paw-Paw and Nana's house. He basically ate anything in sight from pickled okra, to chili, to turkey. Yes, my child who somehow manages to spit out any form of meat when it is mixed in with other things ate an entire plate of turkey. He still didn't eat any veggies that weren't hidden in his food though. Maybe someday. 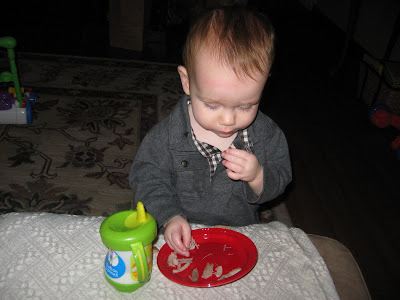 Here he is devouring a plate of turkey. Maybe the trick is to let him eat while standing up? :) All in all we had an absolutely wonderful Thanksgiving and couldn't be more thankful for all that God has blessed us with.
Posted by Donnell Days at 5:48 AM

What a wonderful holiday full of surprises and fun! Can't wait to see you guys soon!!

It looks like you had such a fun-filled holiday weekend! And, Way-To-Go Hudson on your first steps!!! That is SO fun & exciting!!! We are so thankful for you guys! Love you!