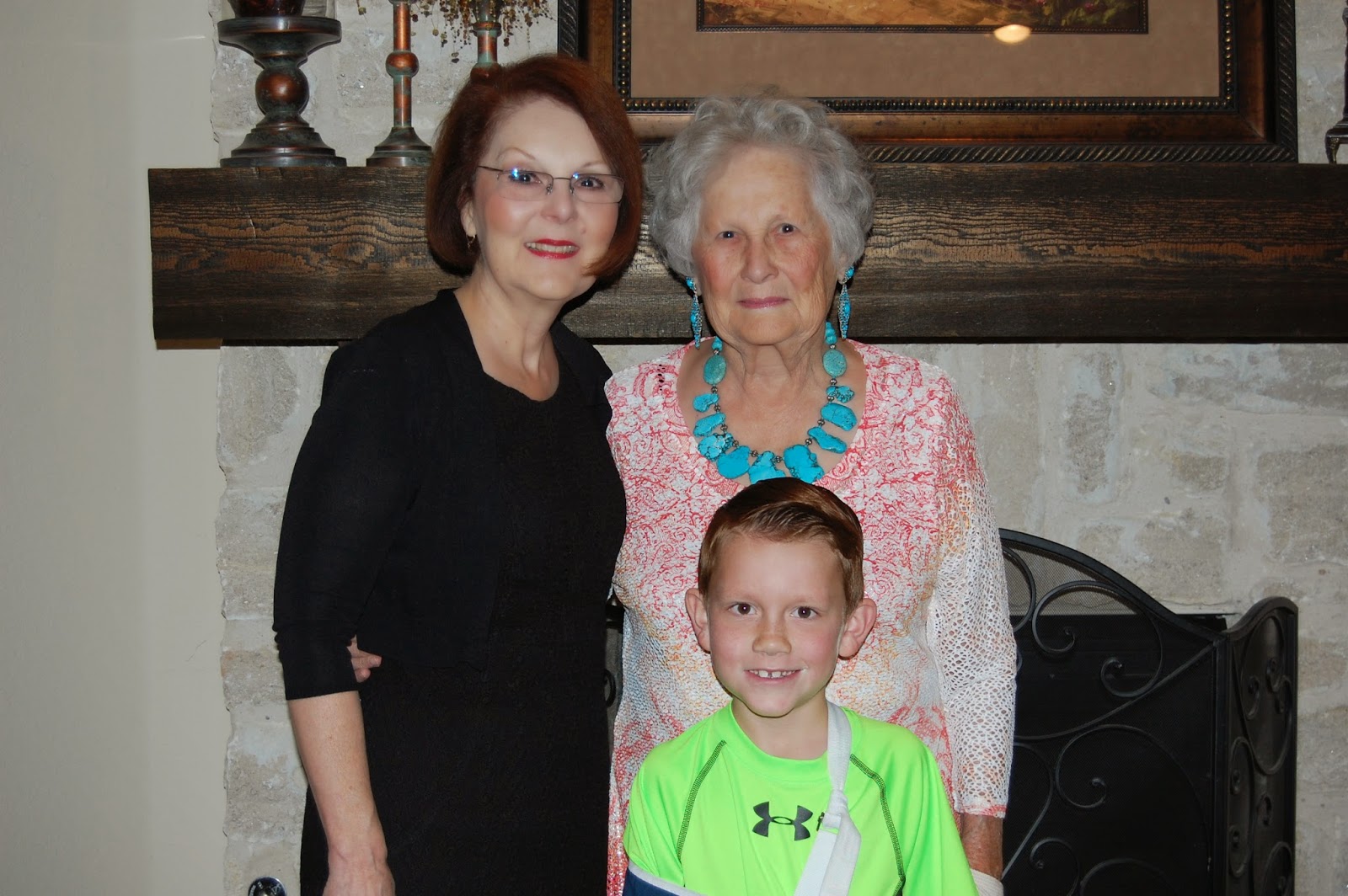 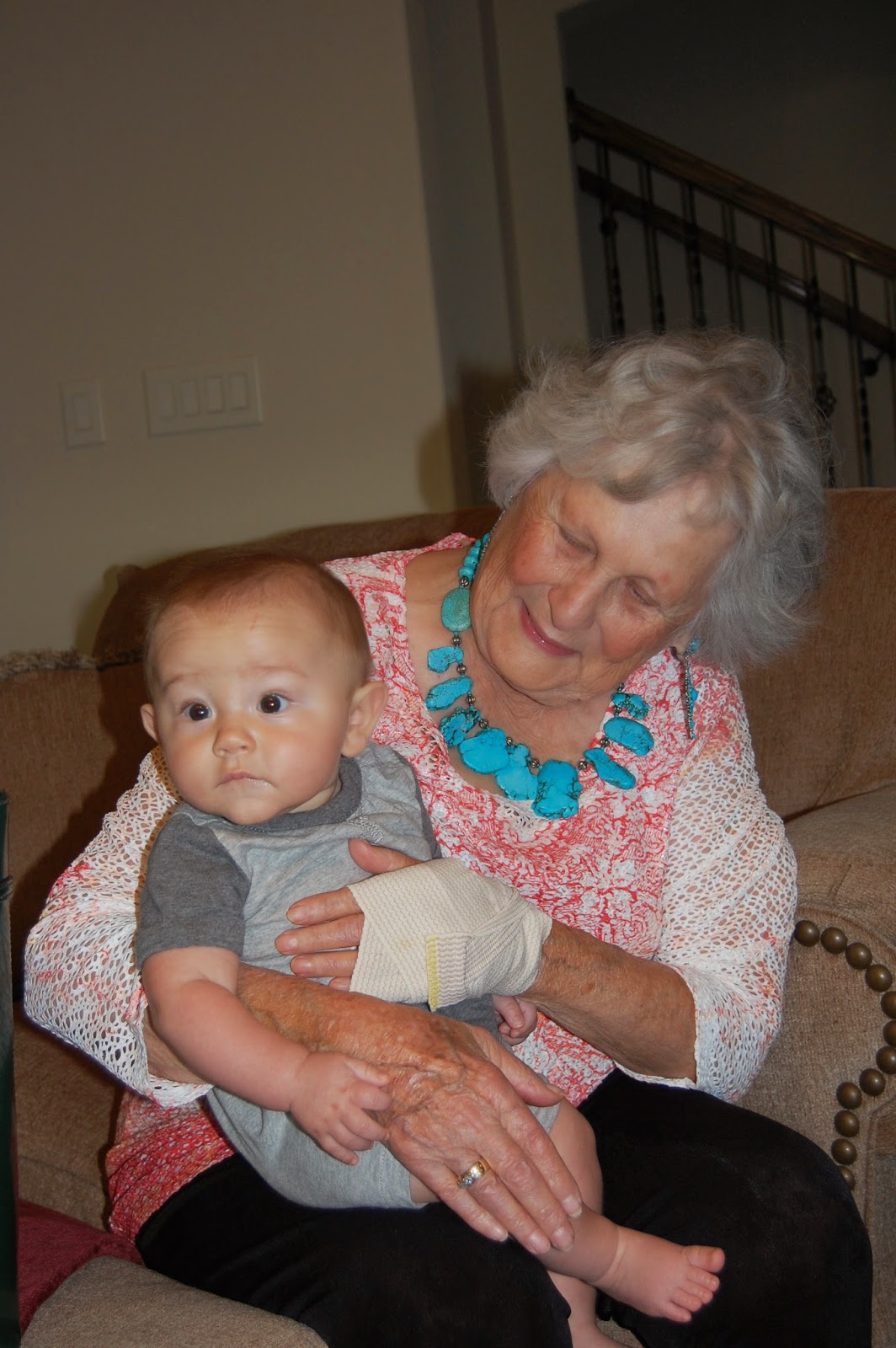 After breakfast, Great Grandma came over and spent some time with Holden and I.  I got to hear some great stories that I had never heard...having had 8 kids, she has some fabulous ones!  :)  It was definitely a special treat that she happened to be in town! 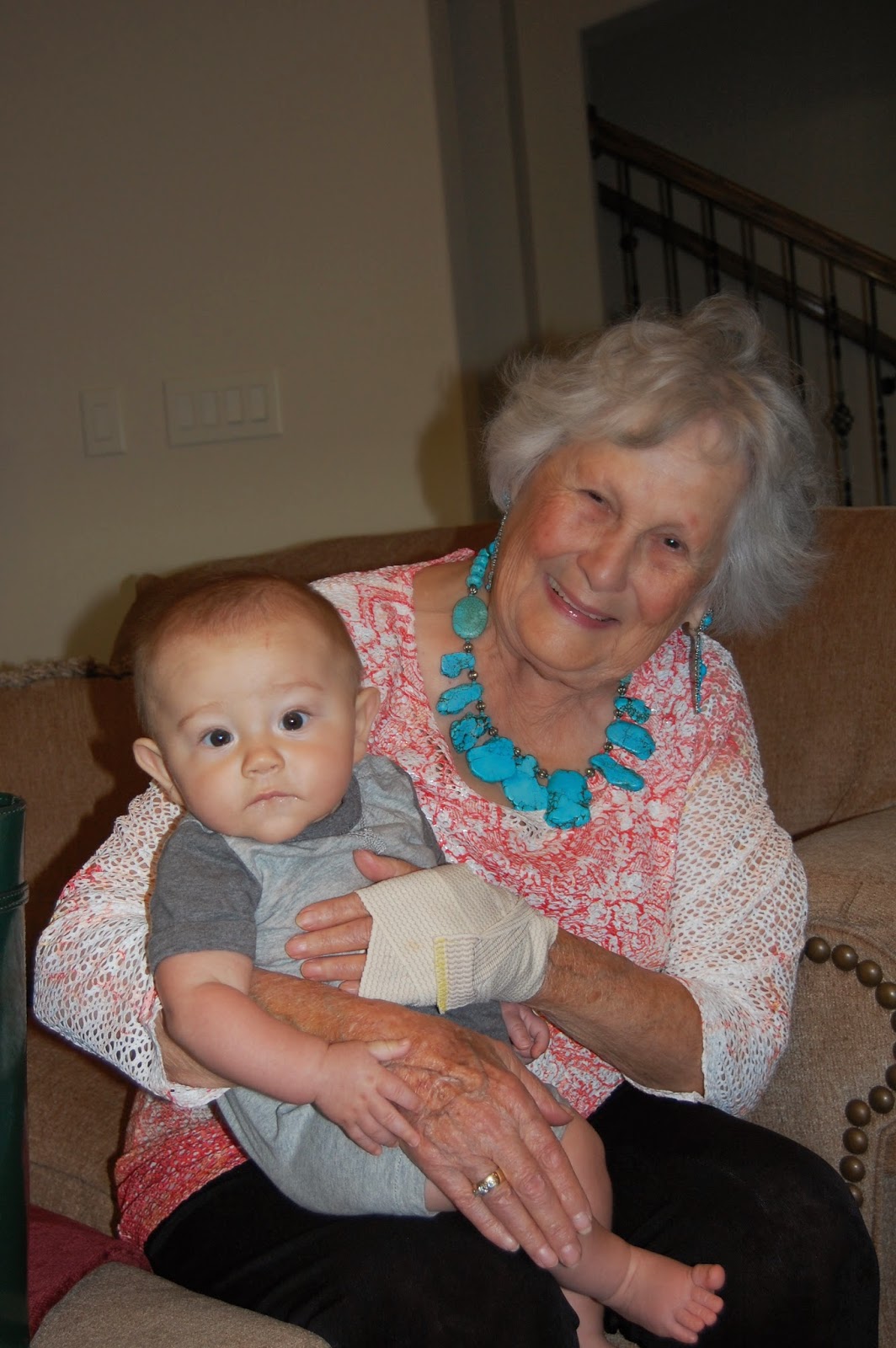 Posted by Donnell Days at 7:50 AM No comments:

This past Sunday afternoon we decided it was time to put the baby swing on the play set for Holden.  He absolutely LOVED it and has swung every day since.  I'm so happy the weather is starting to cool down so we can enjoy the backyard! 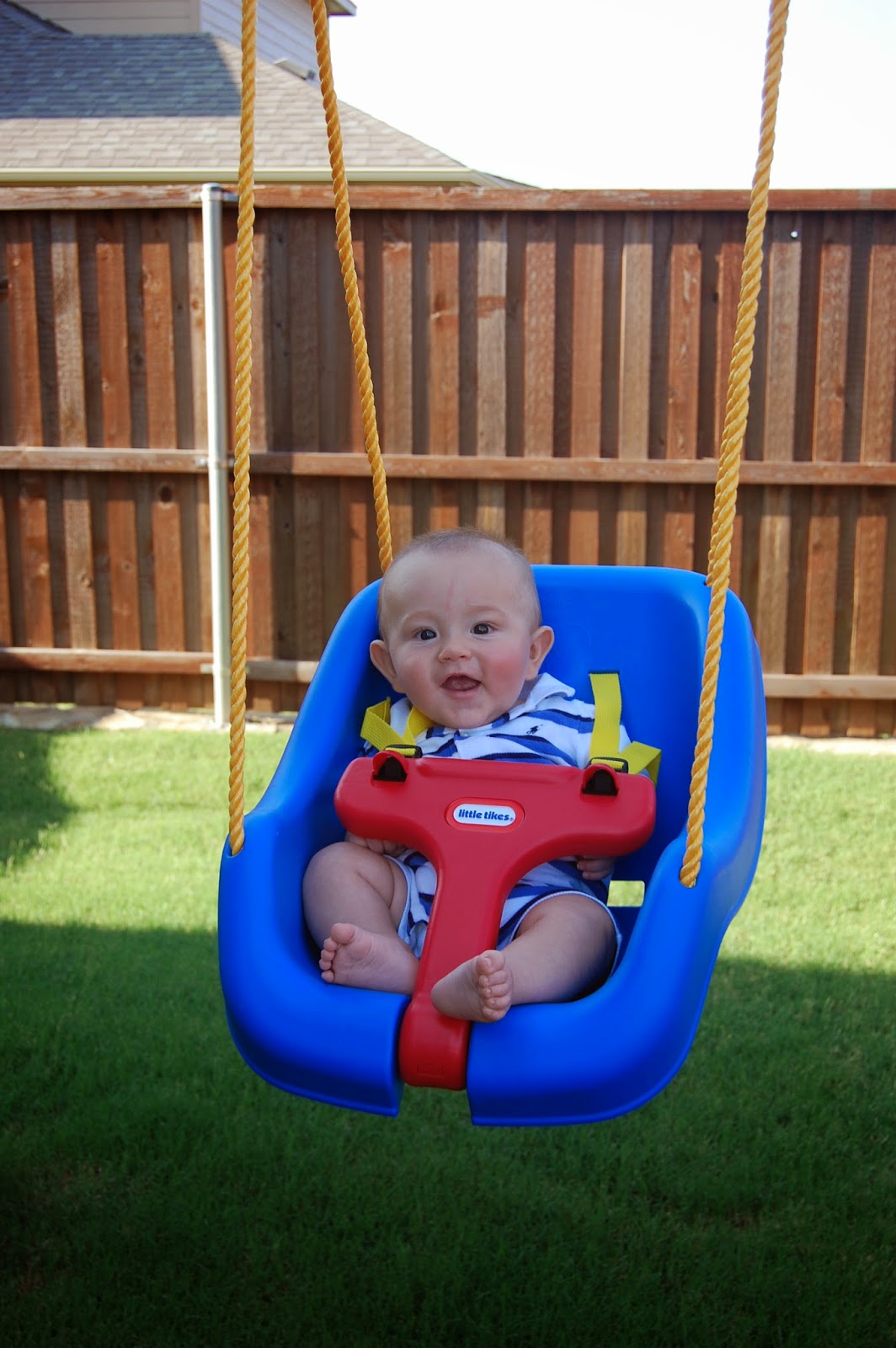 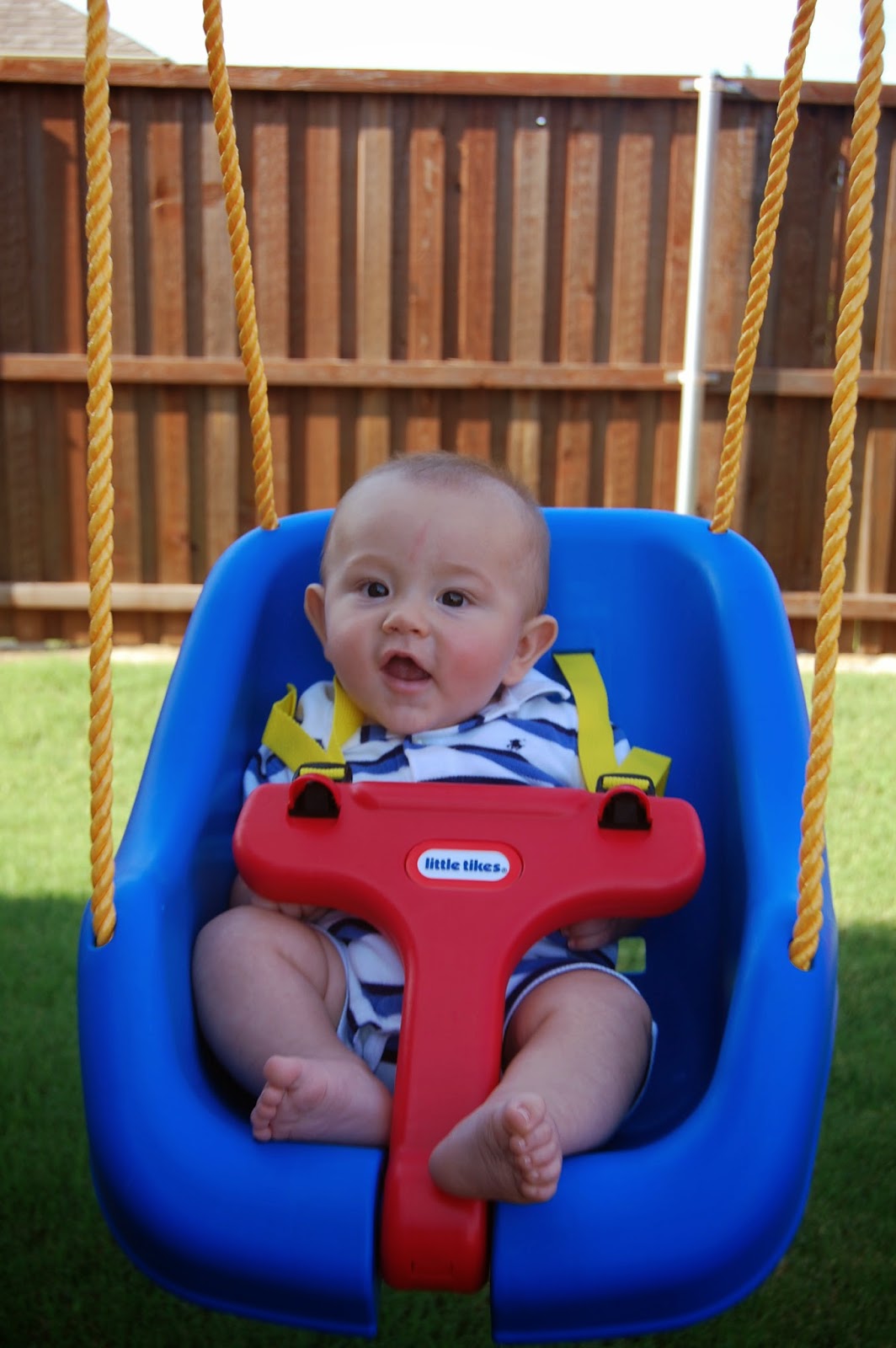 Hudson even felt good enough to take off his sling for a few minutes and get in on the action.  Love these two!!! 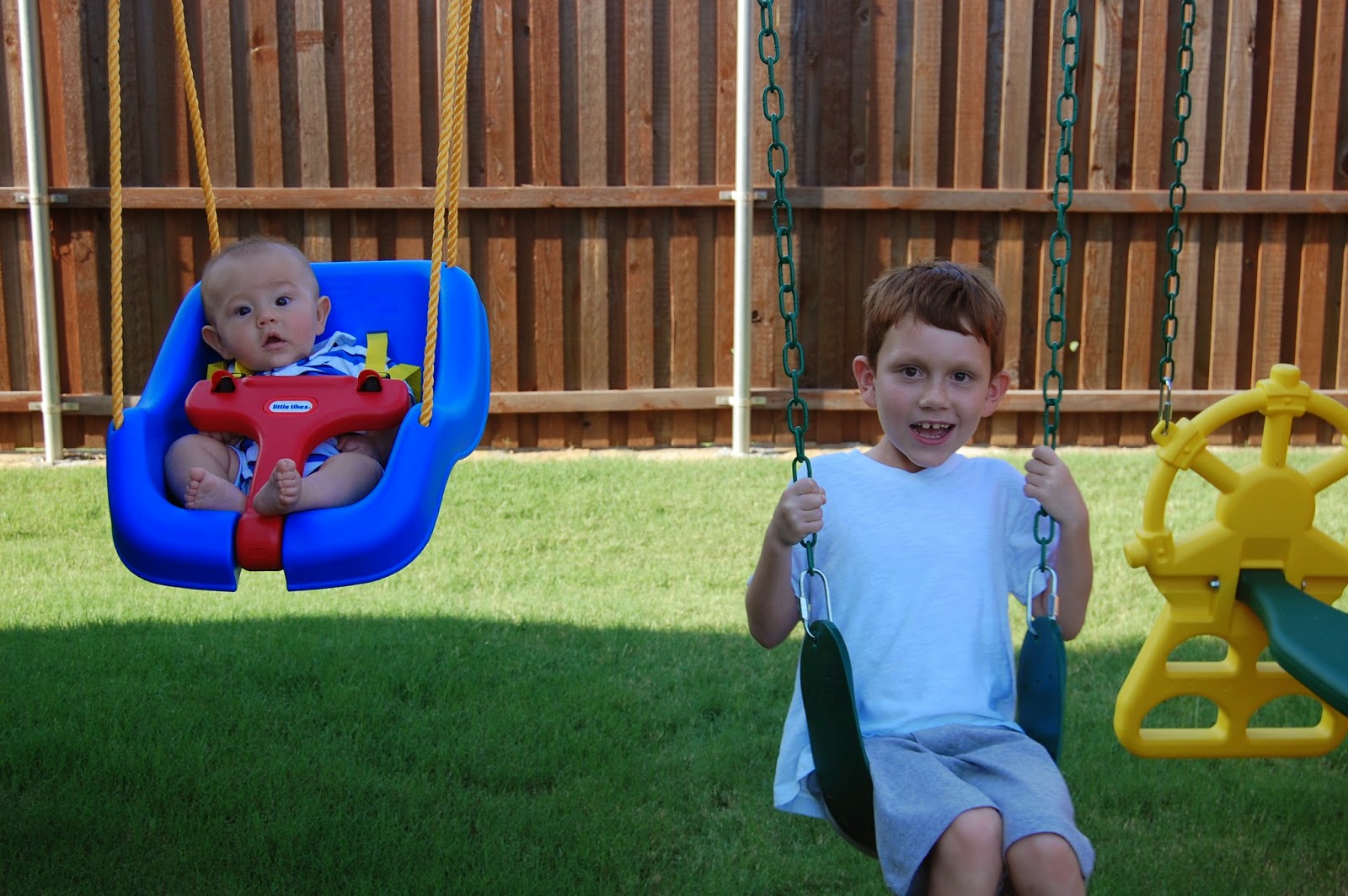 Posted by Donnell Days at 7:46 AM No comments:

A boy after his Daddy's heart...

Kelly planned on taking Hudson dove hunting for the first time this year.  Having discovered the day before that Hudson broke his clavicle, he thought it was a no go.  But, our brave boy decided he wanted to go anyway even though he wouldn't be able to take his bb gun.  Needless to say, he LOVED it and they have already gone dove hunting again.  :) 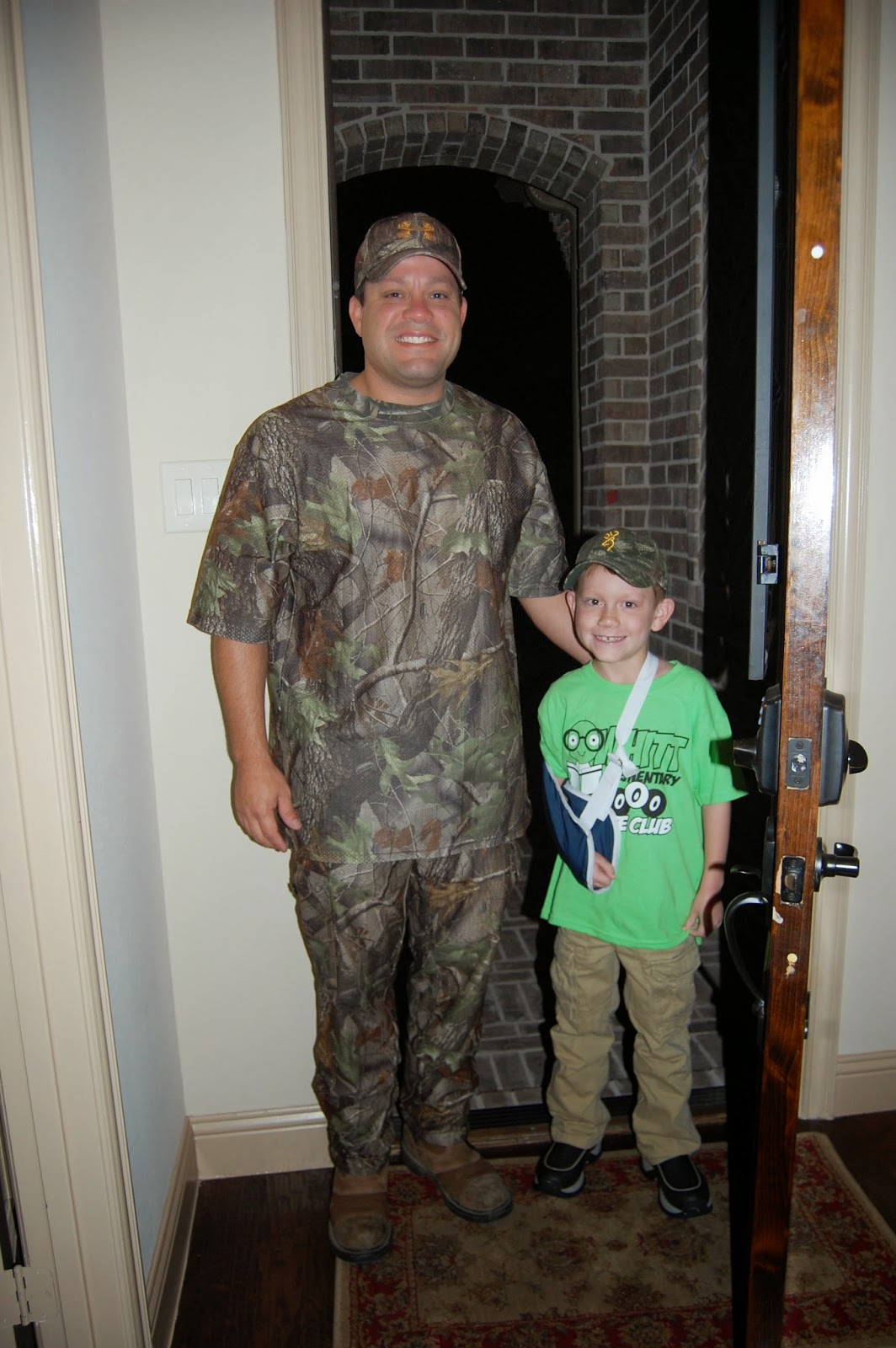 Posted by Donnell Days at 7:44 AM No comments:

Well, as a mom of two boys, I knew it was going to happen one day.  We were at a birthday party on August 30th at a close friend's house.  They had a huge water bounce house slide in the backyard with a tarp under it.  The tarp was really wet and as my sweet boy was rounding the corner of the tarp to get back on the slide, he fell.  He fell just right too...right on his shoulder.  He didn't complain much when it happened, didn't really even cry.  He just said his shoulder hurt and he didn't want to slide anymore.  There was a nurse at the party who felt all over his shoulder and had him move his arm in many different directions and she felt that he was OK.  So, after taking some Motrin and an ice pack to go, we headed home.  We were contemplating going to the ER, but Hudson told us he felt better.  Well, needless to say, he woke up at 3:30 that morning in pain.  So, we headed to the ER instead of church to discover he broke his clavicle.  The ER doctor said he was really tough because he pressed right on the break (before the x-rays) and Hudson didn't even flinch.  So, a sling has become part of his wardrobe for the next 6 weeks.  Poor thing doesn't get to do some of the things he loves most:  soccer, karate, recess, or PE, but he has had an amazing attitude so far.  Here's hoping the next few weeks go by REALLY fast!! 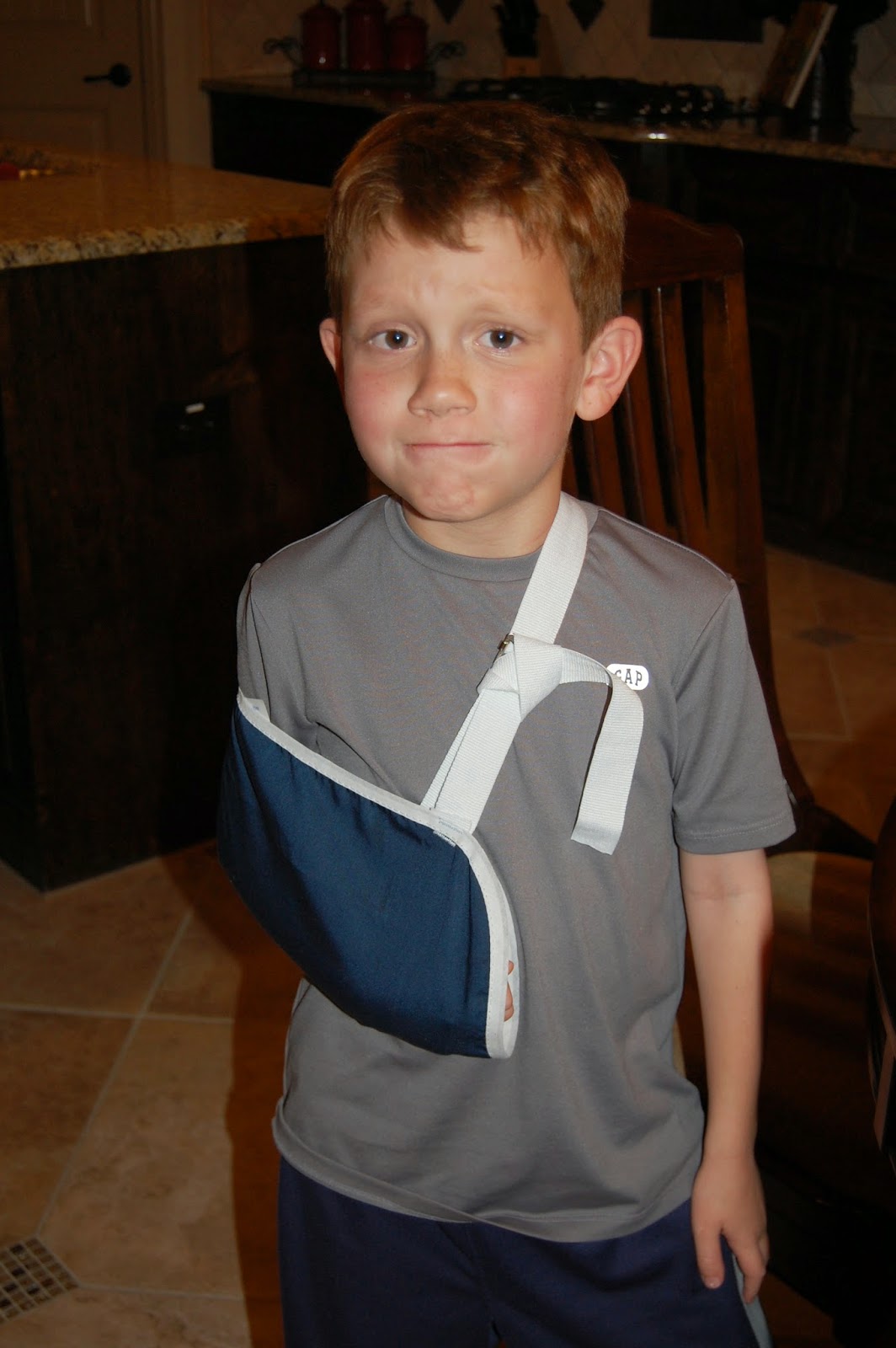 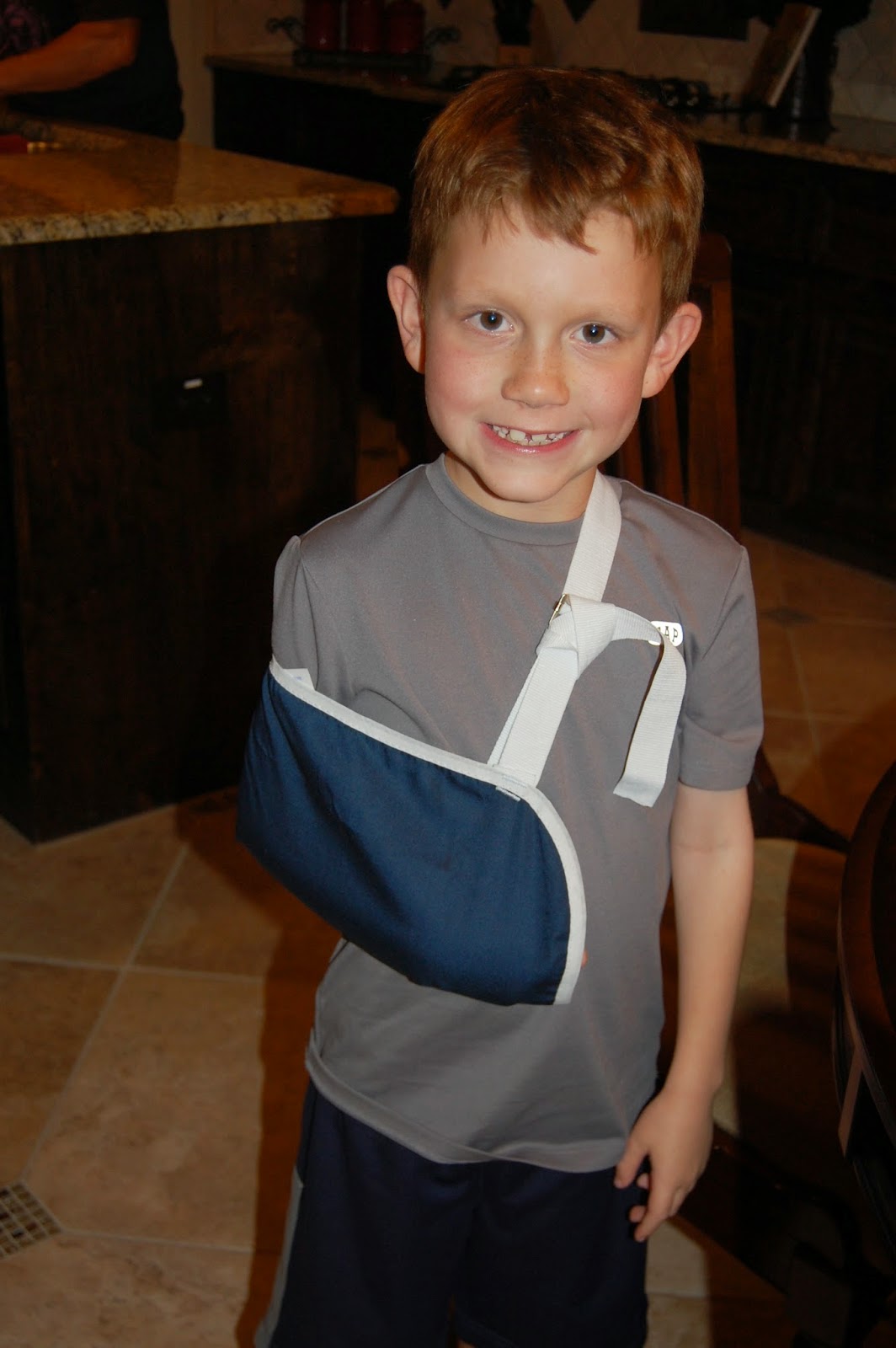 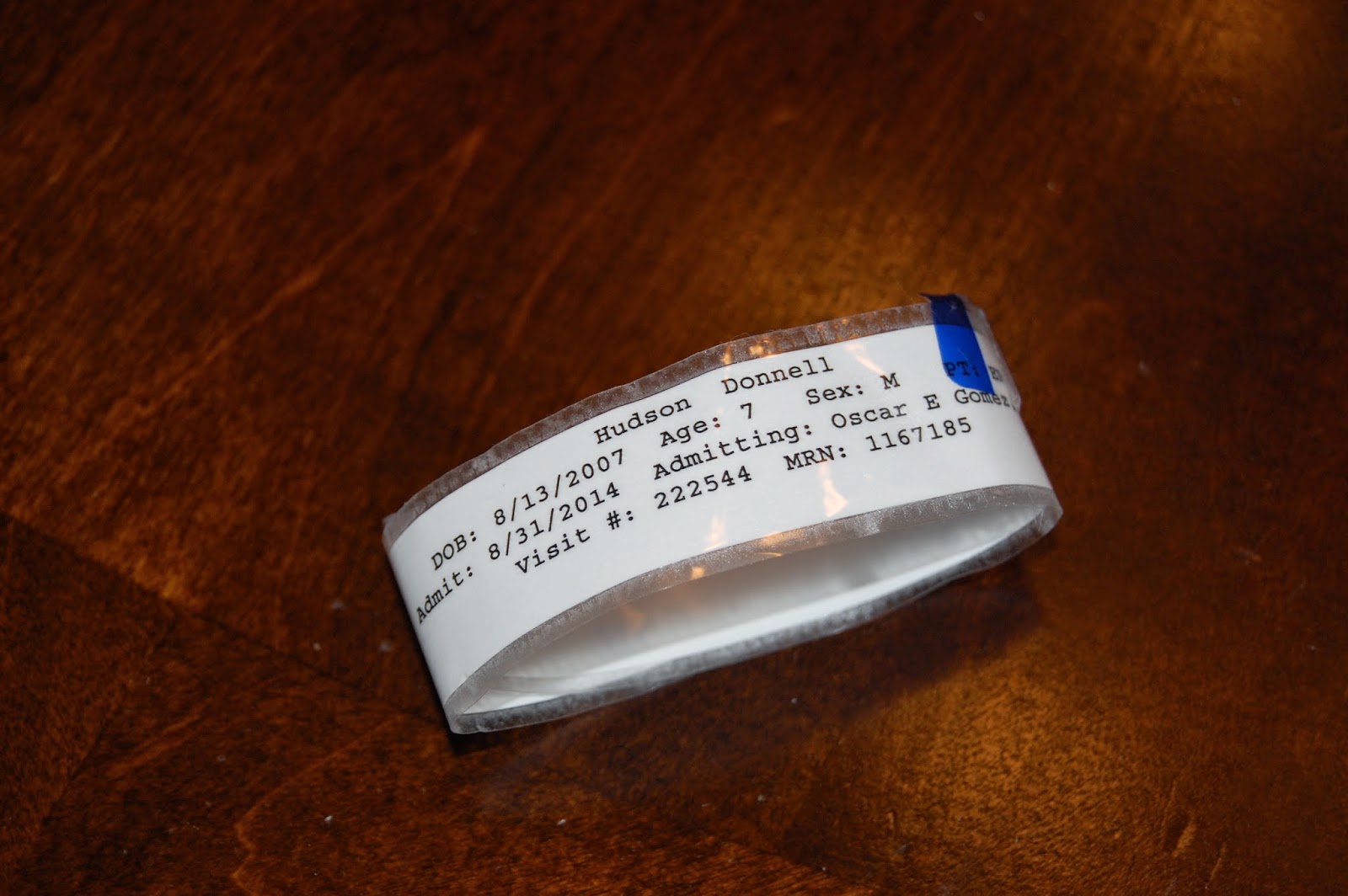 Posted by Donnell Days at 7:41 AM No comments: