I want the one with the sticker!

Hudson is definitely a creature of habit. Every morning he eats the same thing for breakfast...a bowl of Cream of Wheat and a banana. It is the smoothest meal of the day and he always gobbles everything down. He normally eats about half of his bowl of cereal before pointing to the bananas in the basket on the counter. I then say, "Do you want a banana?" and he gets so excited...legs kicking, pointing, and sometimes a little bit of squealing. This is our morning ritual. Well, yesterday he already had his banana and he continued pointing to the bunch of bananas in the basket. I finally asked him if he wanted to hold the bunch of bananas and ended up setting the bunch on his tray. He was SO EXCITED! 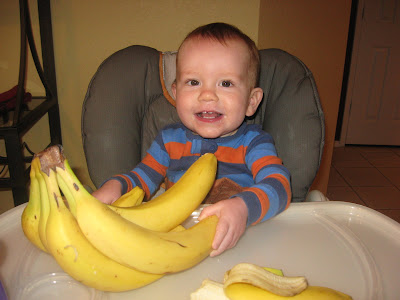 Now, do you remember as a kid wanting the banana with the sticker on it? (Hopefully it wasn't just me!) Well, I showed him the sticker and the excitment grew...he could hardly contain himself. 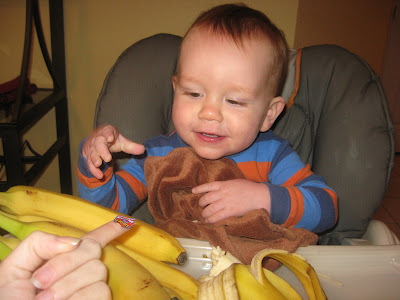 Inspecting the sticker...
(Yes, George eats breakfast with him every morning. Lovies need a little food too...especially this one since he is a monkey and all!) 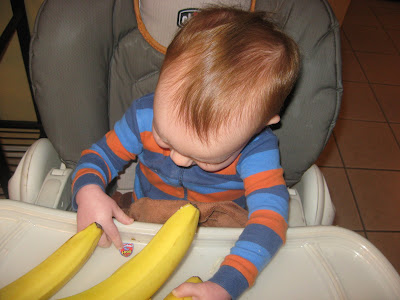 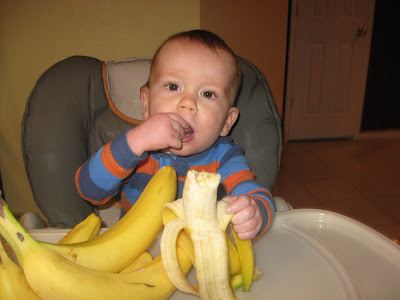 He liked the sticker so much that he decided to give it a little taste...not as good as the banana though! So the next time you eat a banana, you will have to check and see if you got the one with the sticker!

I remember wanting the sticker too! I guess that it was supposed to taste better or something! Ella loves them too! Hope Hudson is feeling better!

Ahhh the good ol' Chiquita sticker on the banana! I remember wanting to wear it all day long! Sometimes in the store I would look for the lucky bunch that had more than one sticker! What cute pictures of Hudson and George with their bananas!