15 Months & Some Trips to the Doctor

Hudson was 15 months old this past Thursday. I'm a little late posting because it was a rough week for the little guy. He started not feeling well on Tuesday and I took him to the doctor on Wednesday to learn that he had ANOTHER ear infection. :( Poor thing. You will see by the pictures below that he wasn't very amused at me trying to get some cute 15 month pics. Other than being sick, Hudson continues to be one busy little guy and he is always making us laugh. He isn't walking but will walk behind anything that can be pushed or anything that is still enough to walk around. He does stand on his own for short periods, but once he realizes what he is doing he immediately sits down. He loves to feed other people these days and loves to help clean. (A boy after my own heart!) Every time I get out cleaning supplies he has to have a rag or sponge to push around too. It is precious! He continues to be very opinionated about food...if he could live off of fruit and goldfish he would be content. My absolute favorite thing that he is doing though is returning to the land of snuggles. Yes, after months and months of not ever wanting to cuddle, he will point to his rocking chair and will cuddle away while being rocked. I could rock him for hours like that! :) 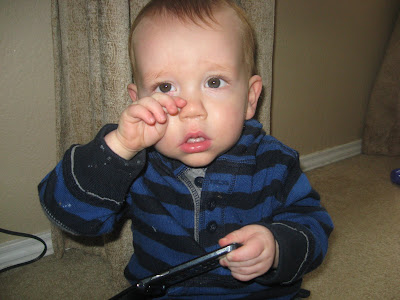 One of his favorite things these days is talking on his phone. He hands it to us first and we pretend talk on it, then say "It's for you" and he happily takes it, puts it up to his ear and jabbers away. (Not very amused at picture time though.) 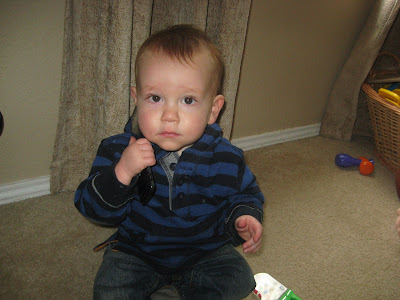 Saturday morning Hudson awoke to find that Paw-Paw, Nana, and Aunt Shani had come for a visit. He was so happy and forgot all about his ear infection for a while. Here he is helping Aunt Shani get ready for the day. 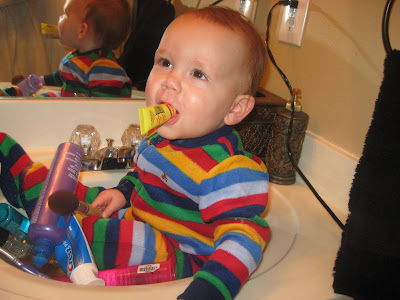 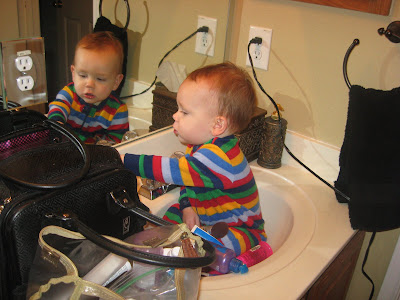 Saturday evening we were getting Hudson undressed for his bath and discoverd he was COVERED head to toe in a rash. After talking to the nurse, she wanted us to take him to Pediatric After Hours to determine if it was a viral rash or a rash due to the penicillin he was on. So, after taking a bath and getting his jammies on we headed to the doctor. 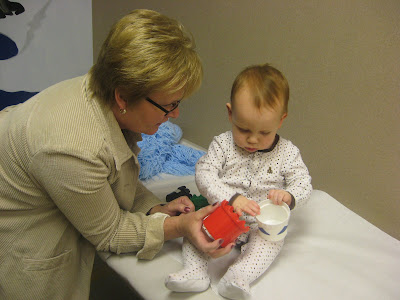 Nana kept Hudson busy while we waited to see the doctor. He did very well for being up past his bedtime and being at a doctors office for the second time in one week. The doctor confirmed that he was allergic to penicillin and he was to stop taking it immediately. I was so sad for him because I am allergic to it also and wanted him to be able to take it. I know that sounds funny, but it gets rid of so many illnesses so quickly and it really stinks not being able to take it. After further examining him, the doctor discovered that his one ear infection had turned into a double ear infection. Man, can the little guy get a break? Needless to say, it was a really long Sunday and Monday, but he seems to be feeling better today. Yea! Oh...forgot to say that during the ear infections he also cut his first molar. Seriously?!?
Posted by Donnell Days at 10:59 AM

Wow...the little guy is growing so fast! I hope he gets better soon! I hate when our little ones don't feel well and you can't do much for them! We're thinking of you Hudson!

poor poor baby! I love that you thinking his cleaning is "precious":)

Dena! Poor Hudson! I've been so bad about checking blogs that I didn't know this when we saw you today! So sorry! I hope he gets to feeling better and stays well! Happy 15 months!

What a tough little cookie! Glad he is feeling a little better!

Poor Hudson! I hope by today he is feeling back to his old self! A week ago today was the start of a rough time, so hope it is much better now!!! We hope to see you all soon! Let me know if you need a ride to the airport next week. We are back on Monday! Miss you guys!