To be honest, I was very weary of taking Hudson to see Santa this year. He has major stranger anxiety and won't go to anyone besides immediate family. So, instead of taking him to the Santa at the mall I scheduled an appointment at The Picture People with Santa thinking that would give him more time to warm up to him and we wouldn't be as rushed to get a picture and get through the line. Well, to my surprise, Hudson LOVED Santa!! Santa reached out his hands and Hudson immediately went to him. WHAT?!? It was so cute...he cuddled right up in his lap and just smiled and reached up and touched his beard. It was precious! While we waited to view the pictures Santa was sitting near us and Hudson took about 5 steps to walk over to see him. Santa was so sweet...he would pick him up and talk to him until Hudson wanted down and then we would do the whole thing again. I could not have asked for a better Santa experience this year! 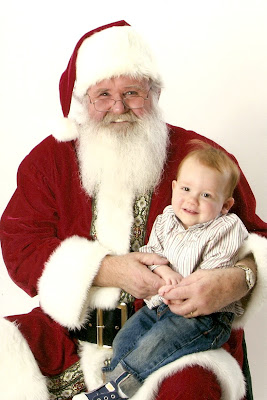 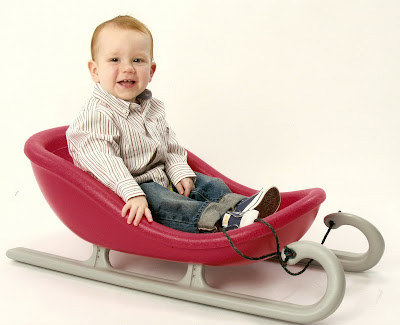 They brought out this red sleigh and Hudson loved it too! We actually hardly got any more pictures because he didn't want out! :) 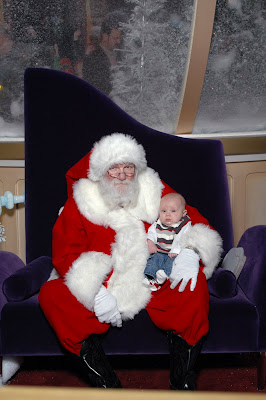 This was Hudson with Santa last year. WOW...what a difference a year makes!!!
Posted by Donnell Days at 10:53 AM

Oh, he is so cute. He is such a big boy now, I love it! It is fun seeing last years picture.

He was hilarious with Santa!! He loved him!!! Such good pics!!

I LOVE LOVE LOVE that he was happy with Santa! Yea!!

Those pictures are so sweet! And I can not get over how much Hudson has changed from last year's Santa picture! WOW!

SUCH a precious picture with Santa. I love it! He is an angel. So great seeing both of you tonight. miss you!br