I know it probably won't be our last visit...

***WARNING...if you are squeamish, you might not want to scroll down!!***
Well, today Hudson and I took our first trip to the ER. This is how it all went down: We were walking in the house after coming home from the grocery store. Hudson was carrying a sack for me and was being his typical self...you know, full steam ahead, never walking, always running or jumping wherever he goes. So, as he was walking through the laundry room he tripped and did a face plant on either the corner of the washing machine or the door frame...I couldn't tell which. I knew immediately by his cry that this wasn't a usual tumble. I picked him up and knew that something wasn't right when I couldn't get the bleeding to stop. His tears were turning in to my tears as I put him back in the car and headed to the ER. I called Kelly and he left work immediately to head our way. We totally lucked out at the hospital. There wasn't anyone in the waiting room and when they saw his face they just rushed us back to a room without even having to fill out any paperwork. That was when the real fun began. To put it mildly, Hudson didn't want anyone looking at him or touching him. They started preparing me for what was about to come by telling me that they were going to strap him down to the table in something that would be like a burrito when it was time to do stitches and I should probably leave the room. I was praying that Kelly would make it before that began. But, once the doctor really got a better look, he determined that it was more blunt force trauma than a major cut and decided he didn't need stitches after all. HOORAY! They told us that it should close on its own within 3 - 4 days and just to keep an eye on it. There was a funny part to all of this...after they determined he didn't need stitches and Hudson was still all shades of freaking out, one of the nurses asked him if he would like a popsicle. The child literally stopped crying in the middle of a sob and calmly said yes. Then they asked him what color and he confidently said red. They told me that children were good actors...HA! So, after that fun we picked up Chick-fil-A and headed home to eat and take a much needed nap. It was an afternoon packed full of TLC and even a visit to Braum's once he woke up from his nap. Oh, and did I mention an afternoon with me being an extremely nervous mommy? The darn thing didn't quit bleeding until almost 6:00 at NIGHT and this happened a little before NOON! So, here it goes...here is a picture of my poor baby when we got home from the ER. Yes, this is actually an after shot. You should have seen it before we went! 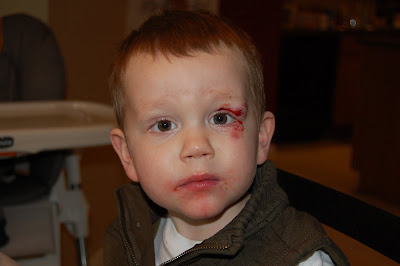 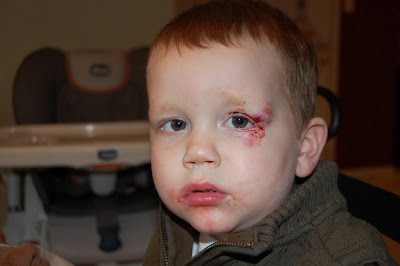 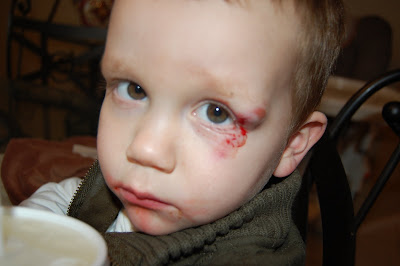 After a shower tonight to get LOTS of water on his face he looked MUCH better. He even let us put a butterfly band aid on it as long as mommy had one on too. 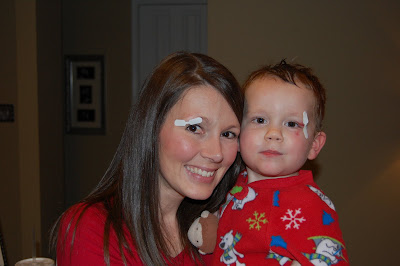 Again, I know it probably won't be our last visit to the ER, but I really wish it was!
Posted by Donnell Days at 7:25 PM

Oh, Dena!!!!! My heart stopped for you when I read this!!! I am so sorry.....for Sweet Hudson AND you!!!!! I have to admit, I did a little laugh out loud when I read about the popcicle....I can SO picture it! I hope you both rest well tonight after a traumatic day! Give Hudson kisses for us! Love you!

DENA! I can't believe this! What a day! I am just waiting for our first trip to the ER. I know it won't be long! :) Hope Hudson feels better and let me know if you need anything! :)

Oh, poor little guy!!!! I'm so sorry for both Hudson & Mommy! He was definitely looking better by the end of the night.

Oh my goodness!!! It always seems to happen at the weiredest, least-expecting times!!! (does that make sense??) So sorry to hear that happened, but so glad that it wasn't as bad as it could have been. What a day!!! Hope Hudson feels better today!

Oh poor Hudson!! that looks sooo painful! what a day!!! I'm so glad he didn't have to get stitches!! Poor thing, feel better fast!!