From the title of this post, you might think that we stayed up until midnight...not the case, but we had a GREAT New Year's Eve! We stayed at home during the day so that Hudson could get some really good naps in. We were trying to get him geared up to stay awake longer than usual. When I heard him start waking up after one of his naps, his talking became screaming which isn't normal. I rushed into his room to find a bruise already forming under his eye. He loves to jump from one end of his crib to the other, so he rung in the new year with a black eye. :( See under his eye? It actually looks much worse now. :( 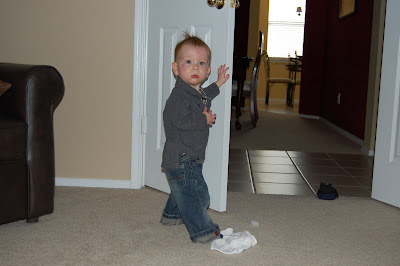 That would be ice on the ground. Ever tried putting ice on a 16 month old? It takes more talent that I apparently have!!

That evening we went over to The Wilson Family's house for a New Years Eve get together. There were 5 families there from our playgroup with all of our little boys running around. It was such a fun evening. THANK YOU Wilson family for hosting!! 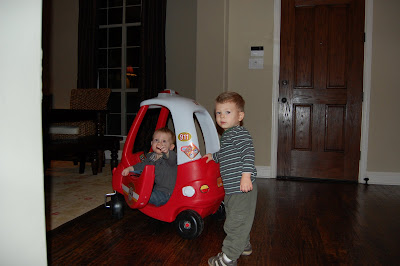 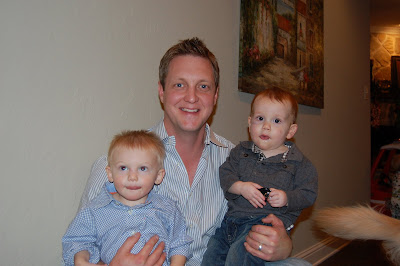 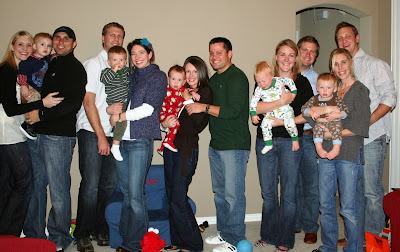 The Gang: The Poe Family, The Northcutt Family, The Donnell Family, The Stock Family, and the Wilson Family
Half of the boys were in their jammies at this point. Hudson let us stay (ha ha) until almost 9:00, which we were greatful for! I did manage to see the ball drop in New York, but Kelly and I were both snoozing by midnight. Here's to a great 2009!
Posted by Donnell Days at 8:53 AM

Happy 2009! Those are some cute pictures at Kara's house. Love the group shot with ALL the little boys and their parents! Too cute and fun- glad you all had a great NYE together :-)

ps- too bad we are not meeting up this week, we could get a picture of the two 'bruiser' boys together and it may look like a scene out of Baby Rocky!