Poor Hudson is growing up in a "house divided". He's got me (and my entire family) who are OU fans and Kelly is a die hard UT fan. This makes for some really fun rivalry and probably one really confused boy. We went to an annual OU/TX party this past weekend and Hudson started out the day in his OU gear and then changed into his UT gear after halftime. One day he will get to choose what he wears and will leave one of us devastated!! 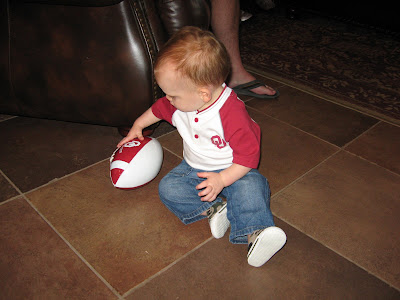 Doesn't he look cute in his OU shirt playing with the OU football?? :) 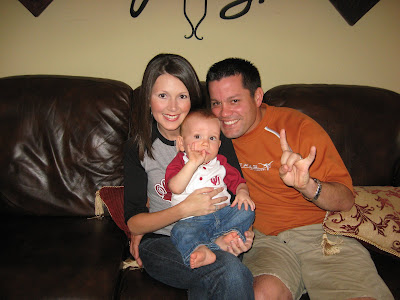 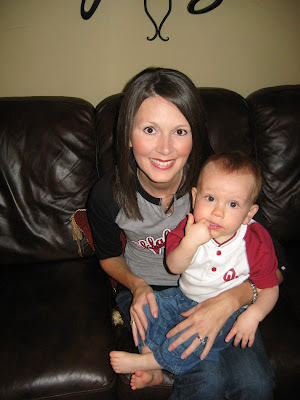 Hudson had such a good time playing with some of the other kiddos at the party, but soon became ready for a nap. We took the Pack N Play hoping that he would take a nap there, but no such luck. He put up one really big fight and decided he was not going to sleep while everyone else was up enjoying the game. So, he fought through the rest of the party and did something he NEVER does...fell asleep in the car on the way home... 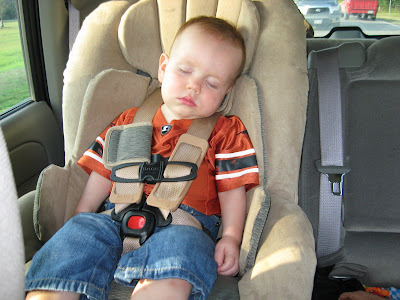 Once we got home we realized that he hadn't had a picture with Daddy yet. He even left his hat on for a second to take some pictures. 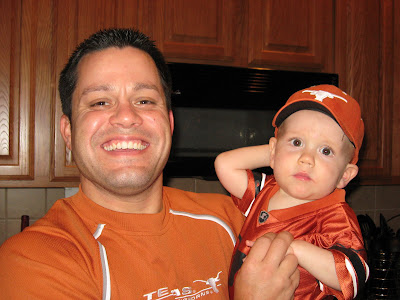 Kelly wasn't gloating about the UT win or anything!!! (Next year Sooner fans...)
Posted by Donnell Days at 11:01 AM

I love it! I personally think he looks darn cute in the burnt orange:) It will be fun to see what team he will cheer for as he gets bigger.
Josh and I can't have a football conversation without Caroline saying, "Go Tech, Beat the Aggies!" Her daddy has taught her well.

Fun stuff :) He's an adorable little fan for either team :) We went to the apple orchard in IL but the pumpkin patch was in Grapevine.

Texas Fight! Good thing you got the burnt orange on for some pictures too!! We had fun seeing you all! Hudson looks so sweet sleeping in his carseat by the way!

He looks so big in his car seat! Wow!