This past Monday we went to playgroup at Amy's. We all brought the boys' Halloween costumes with the intent on taking a group picture. I have to admit we were very nervous about the picture since these normally don't go so well and I was even more nervous about putting Hudson in his puppy costume. Anyone that has ever seen him get dressed or undressed gets that! So, we bravely put their costumes on and headed outside for their photo shoot. 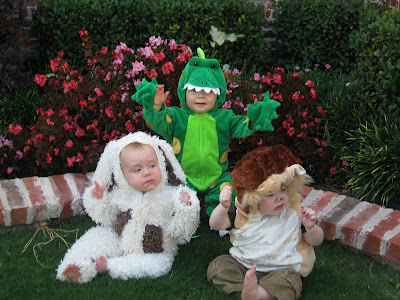 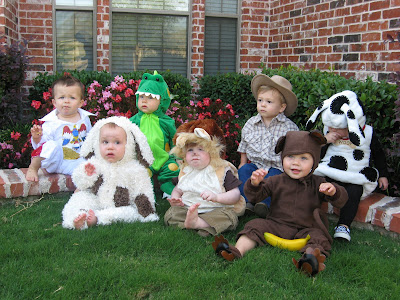 Landon as Elvis, Hudson as a puppy, Sutton as a dragon, Chapman as a lion, Reid as a cowboy, Porter as a monkey, Tanner as a puppy
This is the only picture I got of the entire group. We kept saying that Elvis was leaving the building! :) 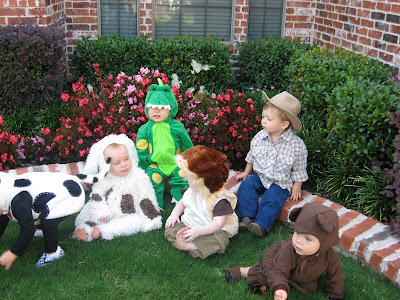 Elvis had made his escape and one puppy and a monkey were making their way out. 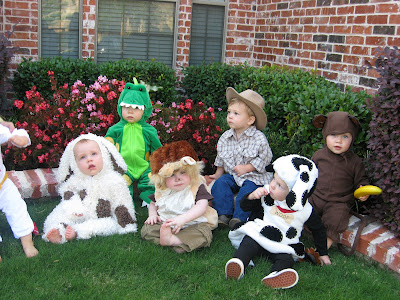 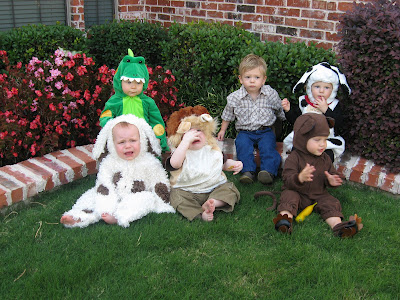 Hudson and Chapman decided they were done with their Halloween photo shoot. All of the mommies were so proud...that was probably the smoothest group picture we have ever attempted. I'm convinced it was because we were outside. They all looked so precious in their Halloween costumes. Hudson was happy to get his puppy costume off...we'll see if we are able to get him in it again this year! :)
Posted by Donnell Days at 10:31 AM

What an adorable little pup! Cute, cute! Impressive that y'all were able to get such great pictures!

This is the cutest post EVER! I just love all of the little boys in their costumes and Hudson's puppy costume is adorable!!!