It's Hudson's 1st Birthday,
and he's just wishin'
that you would come over
for some huntin' and fishin'!

That was what Hudson's birthday invitations said...he had a camo huntin' and fishin' party! It was so much fun to plan for. The idea came easy since Kelly loves to hunt and fish...and there is so much camo stuff around these days. We set up the backyard with baby pools...one filled with magnetic fish and fishing polls, one with ducks, one with balls, and one with water. We are so blessed to have so many good friends with young kiddos that were able to share in Hudson's special day. At one point during the party, I looked around the backyard and just had to smile at all of the kids walking around and playing...it was just precious! :) 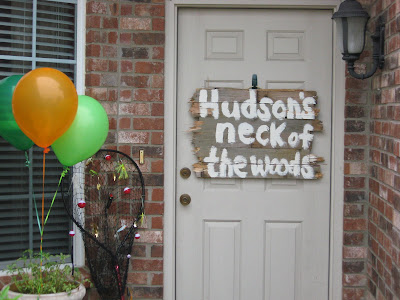 This was the front door. (Kelly made all of the signs and they turned out just perfect ~ very rustic looking!) 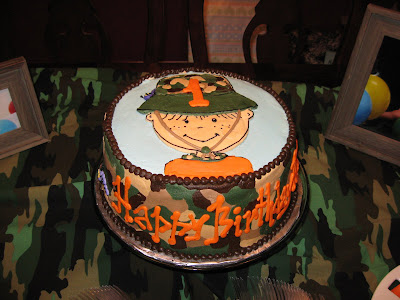 His cake matched the invitations...I just loved it! 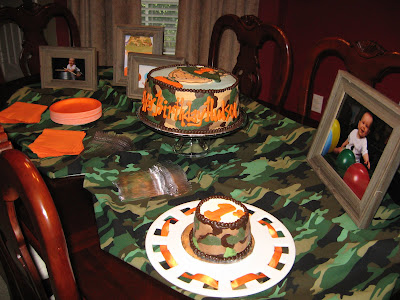 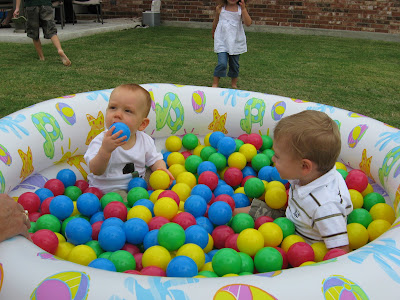 Hudson and Reid playing in the balls. 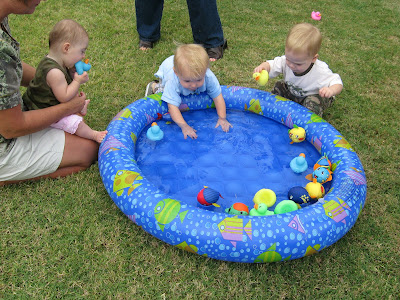 Avery, Tanner, and Colton playing in the duck pond. 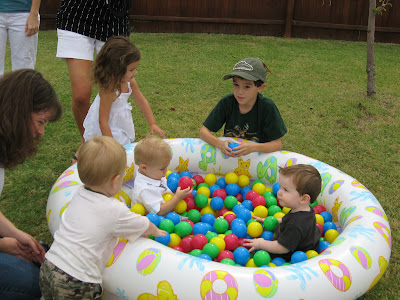 Colton, Quinn, Emily, Jacob, and Chapman playing in the balls. (They were a hit!) 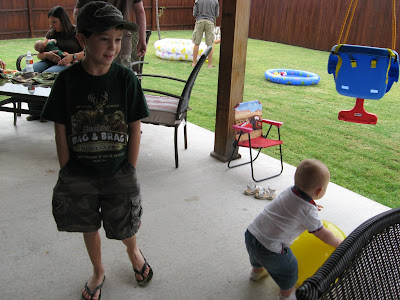 Sweet baby Stone in the background, Jacob, and Reid all taking a break! 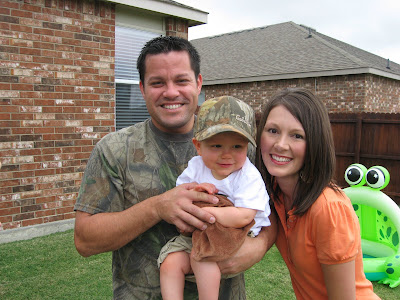 Daddy, Hudson, and Mommy (and George too!) 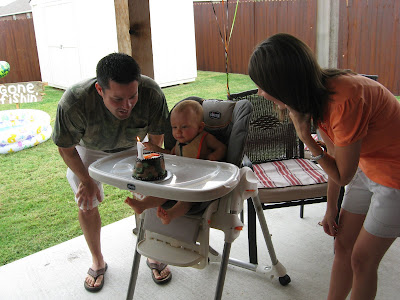 We made a last minute decision and pulled his high chair outside. I was VERY GLAD we did this once it was all over!! 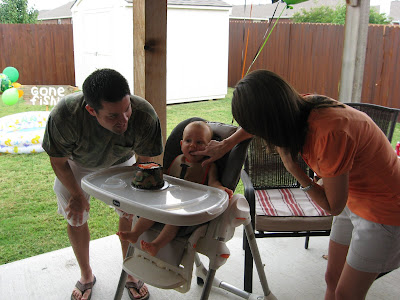 Trying out the icing. He wasn't a big fan of the icing...he wanted the cake! 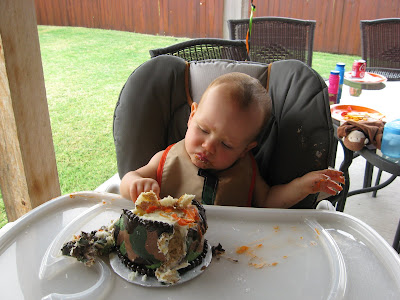 It took a while, but he finally started to get his hands in it. 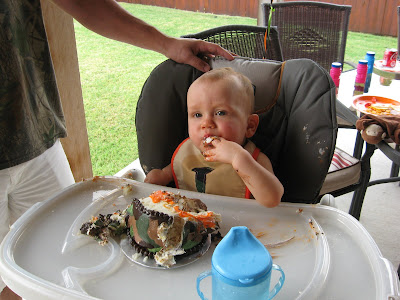 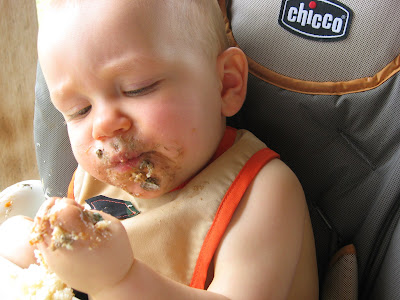 After Hudson was done with the smash cake, he promptly got a bath. It was also nearing many of his friends naptimes, so most of them started heading home. He opened a few gifts before he went down for a nap himself. I'm not sure if he enjoyed the toys more, or the paper! 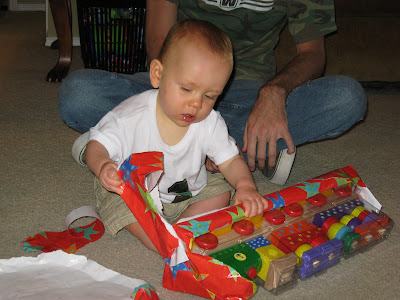 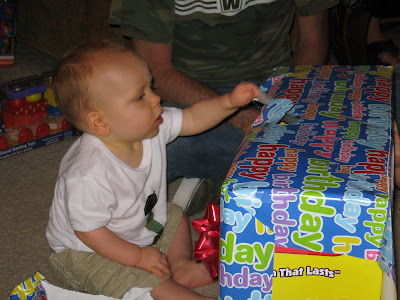 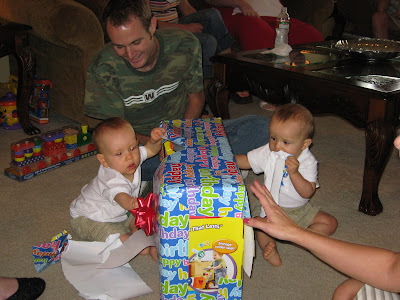 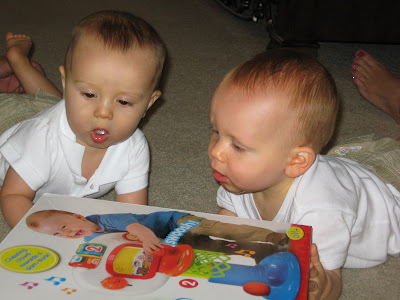 This picture just cracks me up...it looks like Griffin and Hudson are discussing the toy! 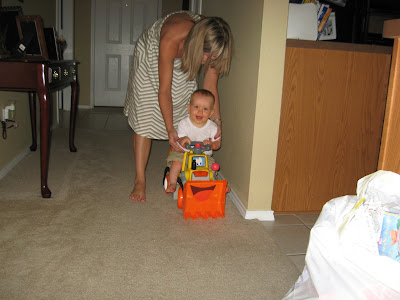 Taking a ride on his new bulldozer. 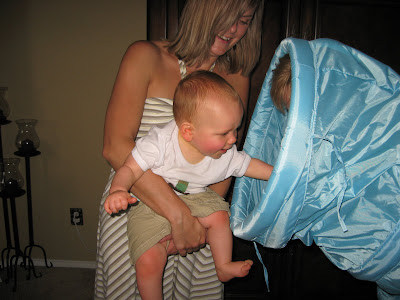 Nana got inside Hudson's tunnel and he thought it was hilarious!
It was such a wonderful day and I still can't quite comprehend that a year has gone by!
Posted by Donnell Days at 4:20 PM

What fun! My favorite picture is of Hudson and Griffin checking out his toy!

We had SO much fun at Hudson's party. Thank you for letting us share in this special day!

We had such a fabulous time at the party!!! You did a great job with the party and the activities! Reid had such a fun time! Thanks for including us in the celebration!

Hi! Not sure if you remember me or not....***and let me first say that I swear that I was just blog hopping around some random people's blogs and ended up here!!***

Anyhow - My husband Kip and I worked with Kelly at Razzoo's! So funny. such a small little world!

Thanks for letting us be a part of Hudson's special day! Everything was so nicely done! We had so much fun, especially Griffin! We look forward to the fun times ahead this year with The Donnells!