You know how one thing leads to another? Well, we've had a lot of that around here lately. It all started 2 weeks ago when Hudson got a little tummy bug. (He was getting sick in the Rainforest post I did, but I didn't realize it yet.) After having a tummy bug for more than 48 hours his doctor wanted to see him. (Appointment #1) The day of this office visit he started to get a runny nose. Three days later he was up screaming in pain in the middle of the night and we had to go back to the doctor. (Appointment #2) Turns out that he now had a horrible ear infection. Since he is allergic to all things penicillan he was prescribed Omnicef and we went on our merry way. Three days later on a Sunday of course we woke up to find our little man swollen and covered in hives. He looked like this: 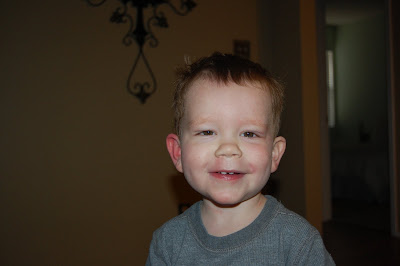 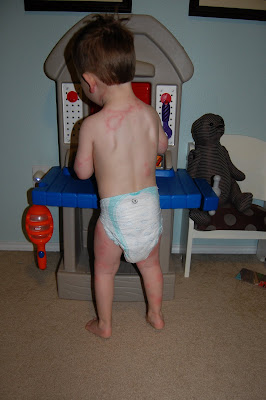 Yikes huh? Yes, I know. Well, we ended up at the after hours doctor (Appointment #3) to find out he is in fact allergic to Omnicef too. So, he was prescribed some ear drops after they discovered that his ear drum had now burst and he was given steroids for the hives. We were told to go back to our doctor the next day to follow up. In case you have lost count, we were back the next day for...Appointment #4! The good news is that our little guy is on the mend after being sick for almost 2 weeks. The bad news is that steroids and 2 1/2 year olds don't mix. They make them CRAZY! They make children do things they don't usually do...they make Hudson act LIKE A NUT! They make him do things like this: 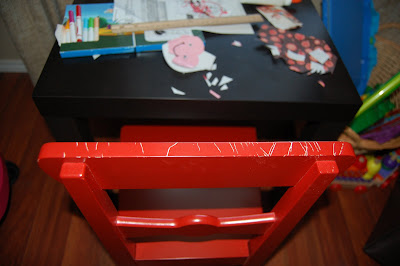 Yes, he used his scissors to cut his chair. That is what he told me. Where was I you ask? Well, after having a child that acts more like a koala (you know...hanging on you all the time) for almost two weeks I was trying to get a little cleaning done in the other room while he was actually doing something independently for a few minutes. So, that has been our recent chain of events around here. It is always exciting!
Posted by Donnell Days at 11:17 AM

oh how sad! i am glad he is starting to feel better!

SO glad he is on the mend...sweet, brave boy!

Oh man! That sounds like a rough couple of weeks...glad to hear that he's finally feeling better! And I totally agree with the steroids thing, Madeline has had to be on them twice and she is an out-of-control, misbehaving maniac when she takes them.

Hang in there and we will have our night out to "vent" soon...praying for you girl...
xoxoxoxo

oh dena I am so sorry!!! I heard yesterday that he had another tummy bug! poor guy! I hope he feels better soon and if you need a break please let me know!

NO fun! But the scissors to the chair, that is funny(to me), not to you:)