Kelly and I noticed a lump on the back of Hudson's head about two weeks ago. It was tiny and we didn't think much of it. This morning Kelly told me that he was certain that the lump had gotten bigger. So, I called and spoke to the nurse at Hudson's pediatrician today and she wanted me to bring him in to check it out. His normal doctor wasn't there today, so I made an appointment with another doctor in the practice. She immediately told me that it was a swollen lymph node and asked if he had been sick. I told her that he had somewhat of a cold a few weeks ago. After examining him, it turns out that he has his first ear infection. The lymph node is very near the ear and that is why it was swollen. She said when he had a cold the fluid probably drained to his ear. Poor little guy. She couldn't believe that he was so happy with an ear infection, but thinks we caught it early. He obviously doesn't know anything is wrong either because he is just as happy as can be. He will start his first round of antibiotics today...another first in his world and I know it won't be the last. 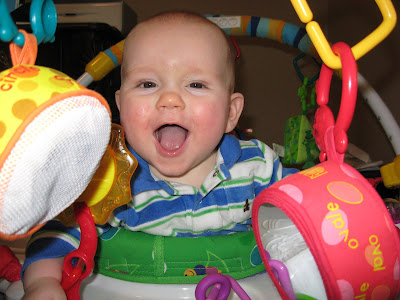 Playing in his jumper when we got back from the doctor. Who's sick? Not this baby! :) 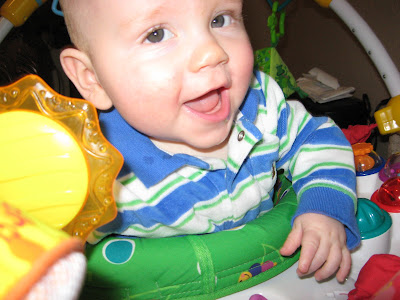 Sweet boy! So glad he's happy despite the yucky ear infections! Does he love the medicine!? Quinn always wants more! :)

So sorry to hear that Hudson had his first little ear infection, but so proud of him for being so "tough!" What a sweet, happy little boy!

How are you feeling Hudson?! Sorry you're sick and hope you are feeling better by Friday! Back in town again, will call you tomorrow!