As I sat down to view all of the pictures I have taken in the past week I thought about doing a separate post for each part of Christmas that we had, but I decided to just do one long post instead. So, get ready for a long post of our wonderful Christmas 2009!
~
After a wonderful Christmas Eve service and wonderful dinner, we headed home in the beautiful snow so Hudson could unwrap his Christmas jammies. This is a tradition that I had growing up and we started it with Hudson his first Christmas. The kid KNEW what to do this year when he saw a present. I mean, he seriously went right to town unwrapping it! 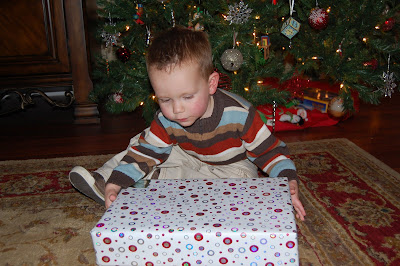 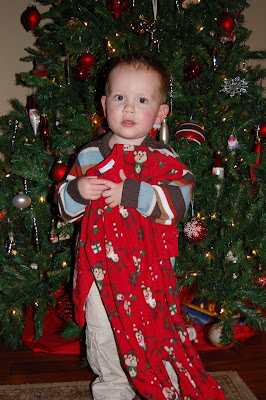 After putting his new jammies on he snuggled in with Noni and I as we read Twas the Night Before Christmas. 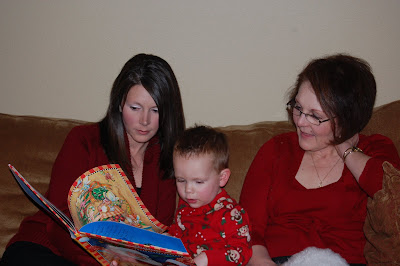 Then, we set out milk and cookies for Santa and carrots for the reindeer. Hudson kept saying "Cookie for Santa, cookie for Hudson, one for both of us" over and over. It was precious! 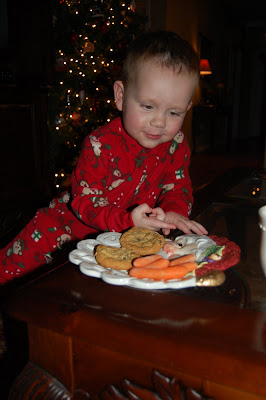 Christmas morning he awoke to find that Santa had come! The thing is, he didn't run to the presents first...no, he ran straight to the plate that had a cookie with a bite taken out of it and... 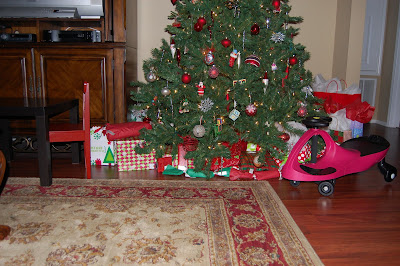 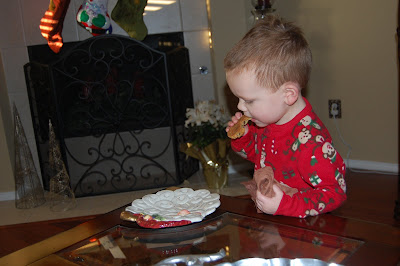 The first thing he spotted was his plasma car. Yes, we realize that his plasma car is pink. No, that was not intentional. You see, Santa goofed a little...the plasma car was marked red in the sack, but it was by no means red. We didn't want Hudson to miss out on his new car, so we left it under the tree and are going to exchange it at the North Pole for a red one this week! :) 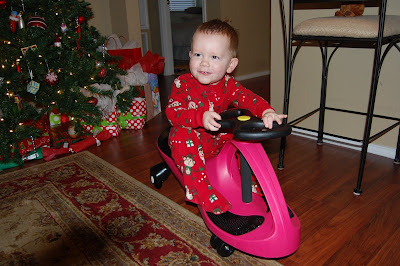 After a few rides on his new car the child went to work. It took FOREVER to open all of his gifts this year and was possibly the cutest thing ever. After he opened each gift he was ready to play with it immediately. So, we would take it out of the box, assemble, add batteries...do whatever it took to begin playing. After playing with the new toy we would finally convince him that it was time to move on to another package. It was SO FUN to watch...I'm not sure who loved it more...him or us watching him. 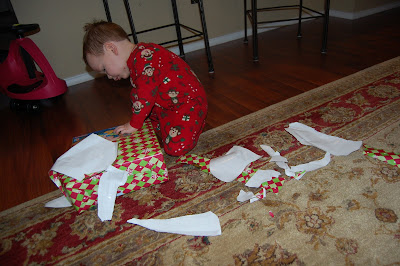 (I must note how Hudson unwraps gifts...he would tear strips of paper off one at a time and make a pile behind him. TOO CUTE!!) 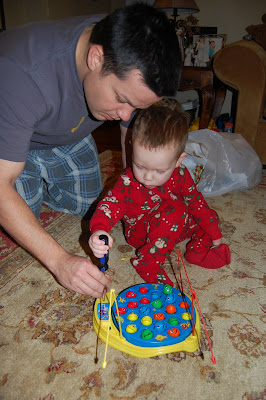 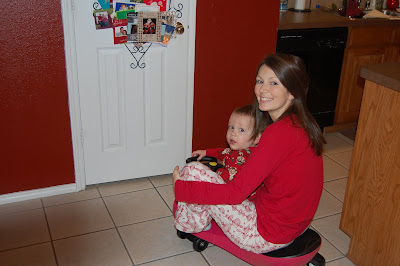 After a wonderful Christmas morning followed by lots of playing and eating we headed up to Oklahoma. What normally takes us 3 hours took 5 1/2 due to the weather. I was one nervous mommy the entire time, but we finally made it. The following morning Hudson was so surprised to find that Santa made a stop there too! 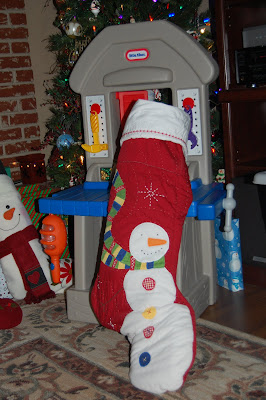 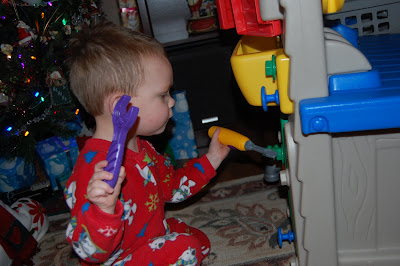 All of us "kids" with our giant stockings...a Long tradition. 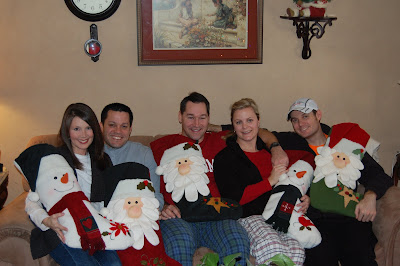 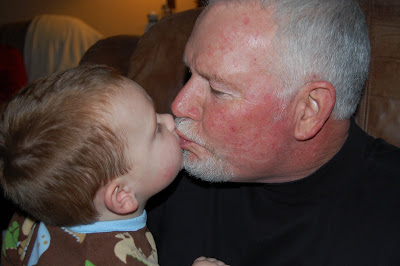 We couldn't leave Oklahoma without kisses for Paw-Paw and Nana! 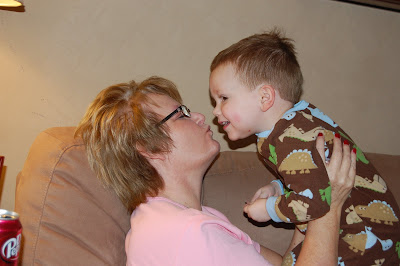 Sunday night we left Oklahoma for our last stop at Kelly's Dad's ranch. You won't believe it, but Santa even made a stop at Poppy's ranch! Hudson was thrilled that he left presents for him in a wagon no less! 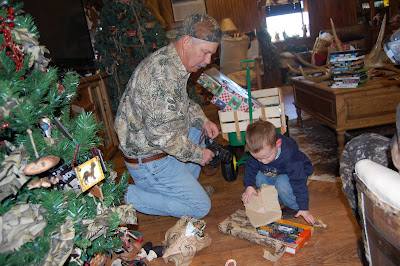 While at the ranch we got to ride around, look at animals, and even wear camo! 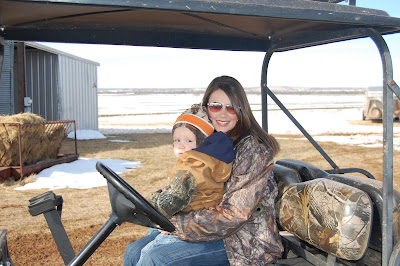 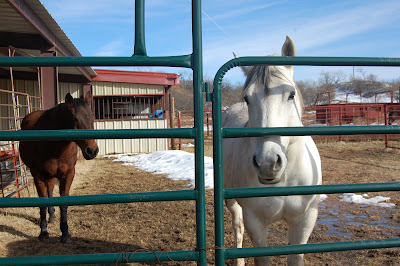 Cute story: While riding around Kelly stopped right in front of Poppy's horses and Hudson said, "No, keep going!" It was hilarious!! He definitely loved riding more than the thought of being that close to the animals. Hmm...wonder if the gets that from his mommy? 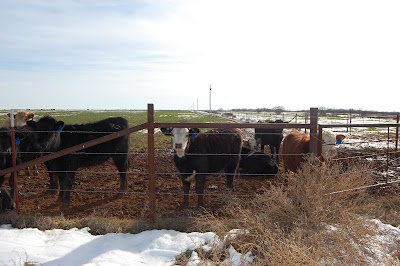 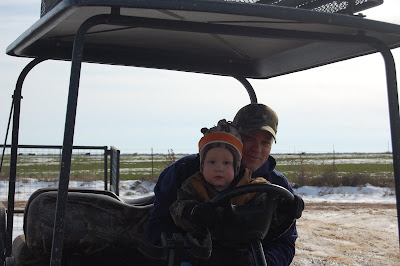 His favorite part was driving with Daddy! 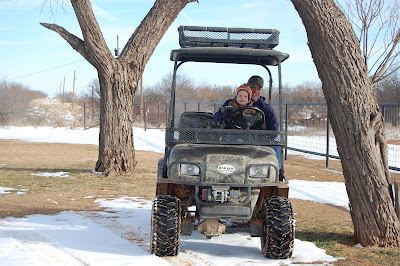 Hudson also got to build his first snowman with Daddy. Or, as I called it, their first snowblob! 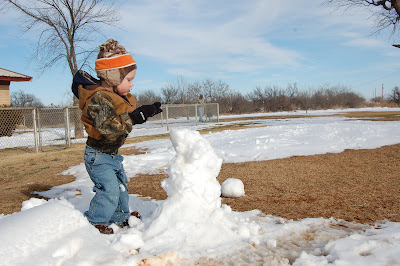 He is so cute! Looks like everyone had a blast!