TEN MONTHS! I can’t believe my little boy is ten months old. Not only that, I can’t believe a year is sneaking up on us so quickly!! Month nine has been an exciting month for Hudson. He is sleeping SO GOOD at night…goes down at 6:00 (yes, 6:00…I know it is early but the little guy is sleepy!) and doesn’t get up until 7:00 the next morning. He is still taking two naps during the day. Sometimes he still takes the third one, but I think he is trying to cut that nap out since it doesn’t happen consistently anymore. I love watching him play these days…he gets very focused on what he is doing and is definitely a “busy” boy! He has also discovered that if he drops something, an adult will pick it back up for him. This occurs mostly in his high chair, but in other places too. He will drop it, then lean over to look at it until it is in his hands again. He is still eating just wonderfully ~ he seems to love anything and everything that is put into his mouth. He is enjoying “real” pieces of food, but would still prefer for it to be placed in his mouth. He plays with it and pushes it around his tray more often than eating it. He plays with his sippy cup too most of the time instead of drinking from it. Oh well…he’ll get the hang of it eventually. He is finally crawling…it is more of a modified rolling reverse army crawl. While most kids pull themselves with their arms and keep their legs straight, Hudson is doing the opposite. He is getting his legs going, but not pushing up on his arms as much, so he basically throws himself forwards…it is quite hilarious to watch, but he gets where he wants! That is one of the things I love most about him ~ he does everything on his own schedule and does it his own way. (Remind me that I made this comment when he is a teenager…ha!) He still smiles all the time and loves being around people. He is starting to get more and more of an opinion though and is showing his first signs of tantrums if something happens that he doesn’t like. Should I be scared?? Yikes! All in all, life with Hudson is absolutely wonderful and I can’t wait to see what the next month brings! 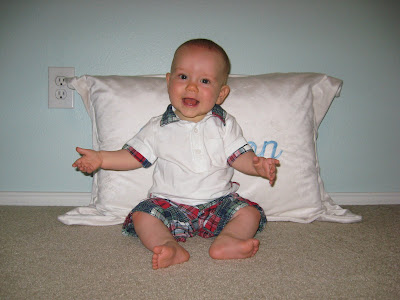 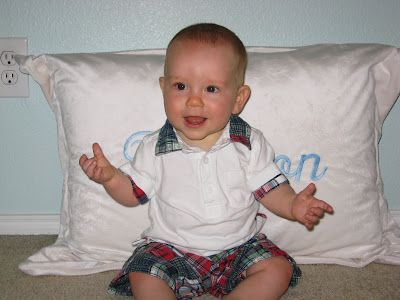 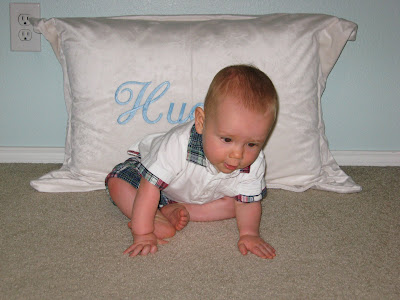 Coming for the toy I was waving around to get smiling pictures with! :) 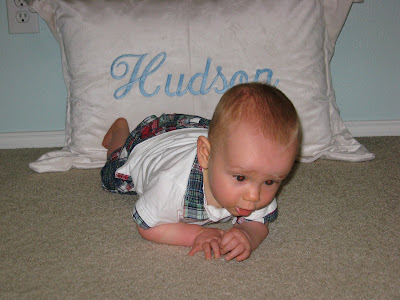 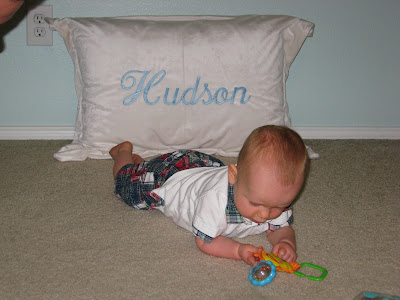 Hudson got to spend his 10 month birthday by spending it with Noni and going to the eye doctor for the first time. Noni has been going to the same eye doctor for years and when he found out that Hudson arrived, he told her that babies need to have their eyes checked in their first year. I had no idea! So, we made the appointment and all went together. Dr. Newman used puppets and all sorts of fun things for Hudson to focus on while he checked out his eyes. His nurse also gave Hudson a toy duck to play with and Hudson promptly bit his bill right off!! Little toot! Who knew that could be done with only two teeth! The appointment went great and his eyes are just perfect…yea! 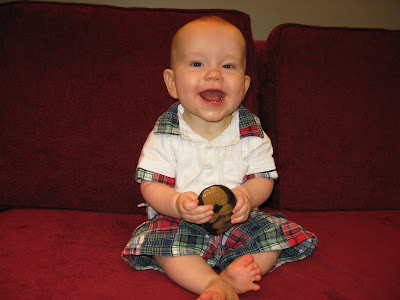 In the waiting room playing with his shoes. 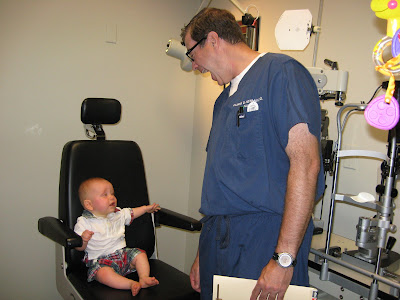 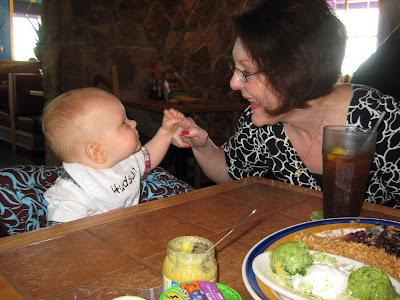 After his eye appointment we went out to eat. Hudson had a great time playing with his Noni! 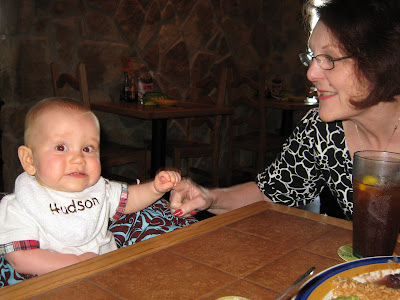 Happy TEN Month Birthday Hudson! Sounds like you had a busy day! So glad you had fun at the Eye Doctor! We can't wait to see you again and see your crawling!! Have fun this weekend!

Happy Birthday Hudson! Time has gone by sooooo fast! Glad everything went well at the doctor! Looking forward to seeing you soon! :)

I am so excited to hear he is crawling! How fun!! We can't wait to see you soon.

WOW! I can't believe 10 months. Were did the little baby go? He is going to be one before you know it!