So, I walk into Hudson's room to get him this morning and I see that he has unzipped his pajamas. Well, that isn't ALL he had done actually. When I got closer I realized that the only part of his body still in his footed pj's was his arms. Yes, he was naked as a jaybird other than that. No diaper. His pj's just flowed behind him like a cape. It was lovely. Then he said these 4 wonderful words, "Pee pee in bed." Yes, my friends...after he attempted to strip down he decided he should "pee pee in bed" since he didn't have a diaper on anymore. Of course, why wouldn't a 2 year old do that? 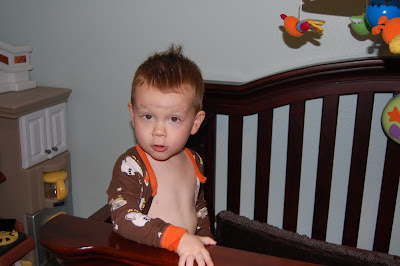 This is the exact look he was giving me when I had first walked in. He was so proud of himself. This is him smiling at his diaper. (Thankfully all he had done was tee tee!!!) 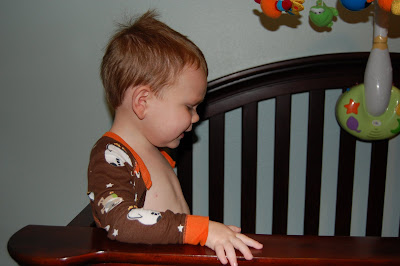 I have learned a lesson from this though...for some reason this pair of pj's doesn't have the little snap that goes across his zipper...we won't be buying those anymore!!
Posted by Donnell Days at 10:57 AM

Oh, that is hilarious!! We went in to check on Avery one night before going to bed and found her fast asleep and stark naked! I was actually able to get a diaper on her without waking her up...but no PJ's!

Wow! That is good times! Love it! This is the first time I have gotten on to blogspot in AGES!!!

I LOVE that expression on his face! He is such a crack up!

Oh no!! That is hilarious!! I love his expression in the first picture!!