This year, Kelly and I "helped" Hudson decide to try out soccer instead of baseball.  He has always claimed to have enjoyed playing baseball, but Kelly and I haven't been sold.  He never looked like he was having fun at practices or games, so we convinced him that soccer might be more his style.  We are SO glad we did too!!  We signed up blindly and just happened to be put on the same team, "Little Monsters" as Hudson's friend Stone and a friend Cooper from school.  I knew at the very first practice when he was smiling and running around like a mad man that he was going to enjoy this so much more.  I think he might just be a little too active for baseball right now...too much standing/sitting around.  Ha!  :)  His first game was September 7th.  Sadly, their uniforms hadn't come in, so they were just supposed to wear green.  They were quite a bunch!  Hudson did great his first game...even scored 1 of 2 goals!! 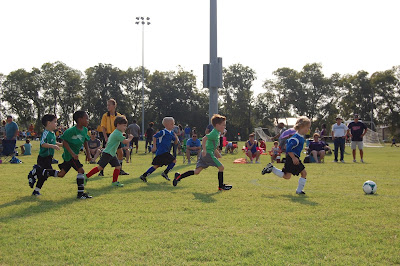 We were surprised at how aggressive he was.  He wasn't afraid to be right in the middle of the action.  His face is hilarious too...he gets a mean face when he is going after the ball. 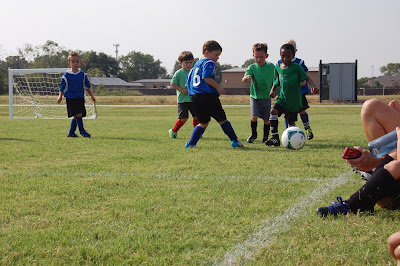 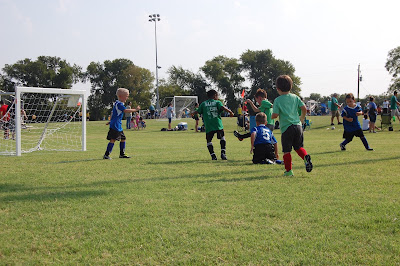 HOT, sweaty mess after the game! 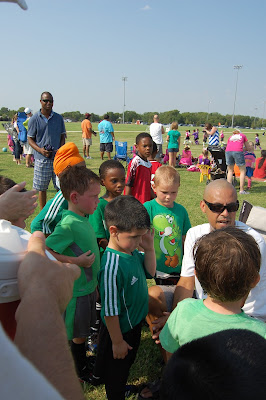 He had his second game this past weekend and he did great again.  I think we found a sport much more his speed!  :)
Posted by Donnell Days at 10:46 AM